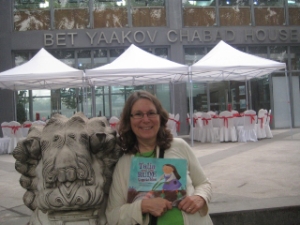 The Whole Megillah (TWM): When did you first realize you were a writer?
Linda Elovitz Marshall (LEM): When I was in fifth grade, my teacher gushed over a story I’d written and said I’d be a writer someday. That sounded nice, but I thought it would be more fun to be a farmer or a jungle-explorer, maybe a hermit. I didn’t realize that, as a writer, I could do all those things.

As time went on, I realized I could write well, but I thought writing was a skill that anyone could learn. I also didn’t think I had much to say.

It wasn’t until my late 30s that I realized I had a strong writerly voice…and a lot to say. I also realized I could get paid for writing. What a shock! It was like someone paying me to breathe.

Since that realization, I’ve written for magazines and newspapers, as well as children’s books. I do a lot of my writing curled up in bed. Now, how good is that?

TWM: How did your first book contract come about?
LEM: I was new to writing for children when I saw a notice about the Jewish Children’s Book Writers Conference. I figured…I’m Jewish, the conference fee’s relatively low, and the timing’s convenient. I’ll go! I sent in my application. Then I realized the conference might  be for people writing for Jewish children. Hmmm, I wondered, Which of my stories might be suitable for Jewish children? As I considered this, I realized most of my stories are inspired by my heritage, so I played with a couple of stories, spicing them with a bissel garlic and chicken soup. One story, Talia and the Rude Vegetables, I wrote specifically for the conference.

At the conference, I had a critique session with Judye Groner, an editor at Kar-Ben. I showed her two of my stories. She didn’t like either and told me why. I listened intently so I could understand what she was seeking and why she was not interested in my stories. I went home, thought a lot, discussed my ideas with my critique group, thought a lot more, and re-worked the stories. Then I re-submitted them both. That’s how I sold my first two manuscripts. 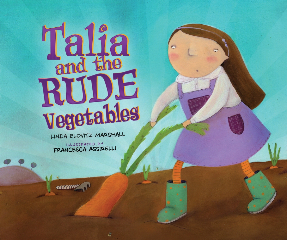 TWM: Where do you find your ideas and inspiration?
LEM: I find ideas and inspiration everywhere, especially in words. For example, I got the idea for Talia and the Rude Vegetables while I was simultaneously peeling carrots for a root vegetables stew and planning a lesson for one of my adult ESOL (English for Speakers of Other Languages) students. While peeling, I thought about the differences between the words “root” (pronounced with the long “u” sound and “t” at the end) and “rude” (also with a long “u” sound, but with “d” at the end). I realized that, for a non-native English speaker, the “t” and “d” sounds can easily be mixed up…So, I wondered what would happen if someone – perhaps a child – did mix up those words? I thought about the folk story of the “Old Man and the Turnip,” borrowed a bit from it, and created “rude” vegetable stew. 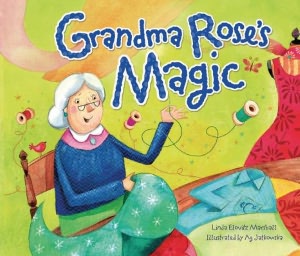 The inspiration for Grandma Rose’s Magic (KarBen, 2012) came from my grandmother, who was a fabulous seamstress and saved the money she made from sewing to buy beautiful dishes.

The inspiration for The Mitzvah Magician came while I was at a conference listening to Judye Groner talk about books for Jewish children. I put together the words “mitzvah” and “magician” and made up the word “mitz-gician.” Then I created a story to go with my made-up word. The magic words that The Mitzvah Magician used came to me by…magic.

TWM: Do you share your work with a critique group? If so, please describe.
LEM: I have a critique group with three other writers. I write mainly picture books, but my critique partners write MG and YA. We do a lot of brainstorming together and are very supportive of each other. For example, Talia and the Rude Vegetables was originally a story about a grandmother and a grandfather. One of my critique group buddies suggested I make it about a grandmother and a granddaughter. That made the story much better; it was a great suggestion.

TWM: How important is it to you to write on Jewish themes?
LEM: I write about a lot of different things – frogs, tadpoles, “rude vegetables,” gardening, misunderstandings, pirates. I care about making the world a better place, about fairness and equality, nourishing the spirit, helping other people. Is that Jewish? Maybe. I prefer to believe those are universal values.

TWM: What have been your greatest challenges?
LEM: There’s a story I’ve been writing for years…and years. Many years ago, I showed a scene I was writing to a wonderful editor, the late Deborah Brodie, whom I’d met through the Jewish Children’s Book Writers Conference. Deborah encouraged me to write more scenes and to weave those scenes into a longer story; actually, Deborah did more than encourage me…she said that I must write it. It took a long time, but last summer, I told her it was almost ready for her. She advised me to continue doing as much as I could and then to get back to her. I re-worked a lot of the story. When I finally got back to her, she was ill. Now she’s no longer with us. I hope to finish it some day…and to dedicate it to her. 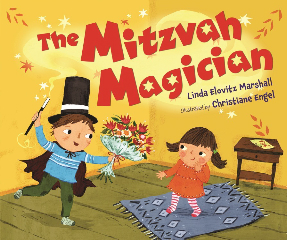 TWM: Once you had a contract, please describe the process in working with your editor(s) and illustrator(s).
LEM: I’ve had two publishers – a small publishing house, KarBen (Talia and the Rude Vegetables, Grandma Rose’s Magic, The Mitzvah Magician), and a large house, Random House (The Passover Lamb is forthcoming Spring, 2013). Both experiences have been great. And the illustrations have been amazing! I’m so happy!

TWM: What advice do you have for aspiring writers?
LEM: Read, go to conferences, think a lot.