Author’s Notebook | Deborah Heiligman and her New YA Novel, Intentions

Posted on November 6, 2012 by Barbara Krasner

Deborah Heiligman is the author of almost thirty books for children, from picture books (fiction and nonfiction) to middle grade biographies and including Charles and Emma: The Darwin’s Leap of Faith (Henry Holt, 2009) and her first novel, Intentions (Knopf, 2012). Charles and Emma was the winner of the first YALSA Excellence in nonfiction award, a Printz honor, a National Book Award finalist, and an LA Times Book Prize Finalist.

The Whole Megillah (TWM): In your acknowledgements, you mention your long road to creating Intentions. What made you stick with it? What exactly is a book in a box?
Deborah Heiligman (DH): First the easy question!  A book in a box is exactly that—in my case it was a large plastic bin, the kind you might put blocks or tinker toys or Legos in. In fact, that’s what we had in that box before I stole it from the playroom for my book. I had been working on Kavanah (the working title) since the Clinton years, and I had so many drafts and research materials and notes, it overflowed my file drawer, so I put it all in the box. And it stayed in there, under my desk, while I wrote other books, many other books, and while the Lego builders grew up. 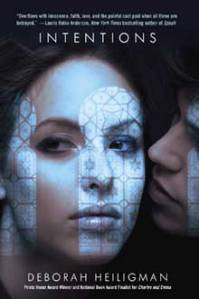 I never forgot about my book in a box, though. I would take it out once in a while, and noodle it. I talked about it, thought about it.  I moved the box from Pennsylvania to New York. I kept all the files on my computer, too—transferring it from computer to computer—three at least! It was a part of me, and it needed to be written. So I guess that’s the answer to your other question. I had to write it. It was a child that needed me to birth it!

But it underwent so many changes. Back in the 90s when I was working on it, it was set in the 1970s. I had a Holocaust subplot, a Viet Nam war protestor subplot, and it did not have a Randy subplot or a Jake backstory (being elliptical on purpose so as not to give anything away). I had more characters—a rabbi and a cantor; a mean best friend and a nice best friend. I had to give out a lot of pink slips.

TWM:  What was your greatest challenge in writing this book?
DH: The biggest challenge was overcoming my insecurity, really. I had written so many

books, but not one novel, and it loomed large. I didn’t think I could write a novel. But it was finishing Charles and Emma, which one could call a nonfiction novel, that finally gave me courage. Notice I didn’t say the success of C & E, I said finishing it. Then my next greatest challenge was having the guts to publish it. I was scared it would be really controversial.

TWM: What was your greatest satisfaction?
DH: I wrote the book I wanted to write. Which is HUGE. And it is a book from my heart, my soul. Quite a satisfaction, really.

TWM: If you had to start from scratch right now, would you have done anything differently?
DH: I wouldn’t get in my own way. What I mean is, I would push through the insecurity faster. I hope I do that next time.

TWM: Intentions has great meaning for a Jewish audience, yet the book is published by a mainstream house. Can you talk about the strategy you and your agent used in placing the manuscript?
DH: I don’t think we really thought of it as a Jewish book, but as a book about a particular person in a particular world. That said, the editor who pounced (my agent sent it to maybe seven, some of whom rejected it), is Jewish. Not only that, but she went to Brown and concentrated in religious studies just like I did! (Though her specialty was early Christianity, and mine was Judaism.)

TWM: How important was your writing group/circle of writer friends to creating this book?
DH: My old writers group on Pennsylvania saw many pieces of it over the years. And my newer friends in New York read whole drafts, as did a few from my old group and even some far-flung friends. I also had readers from a class I took, and great encouragement from them and the teacher. The support was invaluable, as I think I make clear in the acknowledgments. (Does it sound like I’m shouting from the rooftop?)

TWM: The book starts off with a bang. How did that sanctuary scene come to you?
DH: A bang, so to speak. Hah. You know I can’t remember exactly how it came to me, but I knew I wanted Rachel to have a really upsetting experience in which her idol comes crashing down in a spectacular fashion. I was writing it during the Clinton-Lewinsky debacle and also during the Neulander trial. Remember the New Jersey rabbi who had his wife killed?  So I pretty much knew that what she witnessed had to be BIG. But guess what? For many drafts that scene was in the MIDDLE of the book. Too much leading up to it. Too much set up, back story. Then finally I realized that I needed to—as they say—start with an earthquake and build from there.

TWM: Did you debate about using strong language in the book or was it always clear that was Rachel’s language?
DH: Both. I wrote it as I thought Rachel would speak, and sold it that way, and then I worried about it. A lot. But I was the only one who worried. I had at least half a dozen conversations with my editor about the F-bomb. I remember three of her answers clearly. The first time I worried about it with her, she said, “We are putting 14 and up on the book. If you do, you don’t have to worry. You can do anything.” Another time I worried about it with her, she said, “Deborah, the F-bomb is the least of your worries.” Which was not, in fact, that reassuring! The last time we talked about it, she said, “I think you are focusing all your worries about the book on that word. If you want to take some out, you can. But I wouldn’t take them all out. It’s TRUE and REAL.” So at the last minute I did go through and I took out every instance where I thought it was gratuitous. I think I took out two. Maybe.

TWM: Do you have other novels in the works? What’s next for Deborah Heiligman?
DH: I am currently working on a nonfiction book about Vincent and Theo, those rollicking Van Gogh brothers. I have two picture books coming out next year: a nonfiction one called The Boy Who Loved Math: The Improbable Life of Paul Erdos,  Illustrated magnificently by LeUyen Pham; and the third in my series about Tinka, called Snow Dog, Go Dog, illustrated again by the terrific Tim Bowers. And YES, I have actually three novels—not in a box, but in files, and in my head. But Vincent first.

6 Responses to Author’s Notebook | Deborah Heiligman and her New YA Novel, Intentions