The Whole Megillah caught up with Leanne Liebermann and her editor Sarah Harvey to talk about the new YA novel, Lauren Yanovsky Hates the Holocaust (Orca, 2013, 240 pp.).

The Whole Megillah (TWM): What was your motivation for approaching the topic of hating the Holocaust?
Leanne Lieberman (LL): Like Lauren Yanofsky I too was sick of hearing about the Holocaust. I had read enough books, seen enough movies and felt there were other aspects of my Judaism that I wanted to explore. I declared myself “done with the Holocaust.” Then, a grade six student of mine made a swastika armband during a French class I was teaching. I was really taken aback. The student knew that the Nazis had fought in World War Two but didn’t know about the atrocities they had committed against Jews and many other people. The student apologized for making the armband and I tried to forget about the incident, but I was still troubled on many levels. It bothered me that this boy didn’t know about the Nazis, and it also bothered me that I let this get to me. Did everyone need to know about the Nazis, even eleven year olds? Ultimately I knew I would have to write a book to sort out my feelings about the Holocaust.

TWM: The relationship between Lauren and Brooke feels typical of a best friend relationship in high school where each girl develops her own interests. Can you please describe how you came up with Brooke and how you developed her as a character?
LL: Brooke started with an anecdote I remembered from high school about a girl I knew who put sugar in her dad’s gas tank to mess with his car after her parents divorced. She was actually a good girl, but a lot of her friends had a rougher side to them, and the character of Brooke developed out of that story, about a girl whose parents get divorced and who starts hanging out with a rougher crowd of kids. Brooke is important in the book because as you say teenage friendships often change very quickly and Lauren finds her friends’ changing interests to be challenging. 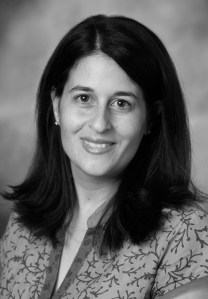 TWM: Similarly, the relationship between Lauren and her brother, Zach, is very tender and his story makes for an endearing subplot. How did you develop Zach and his story line?
LL: The story of Zach’s bar mitzvah was an integral part of the book because I wanted Lauren to have another path into her Judaism. Since Lauren isn’t very interested in being Jewish, it had to come through her family. When I started the book and I was thinking about a sibling for Lauren, I remembered a story about my younger brother hiding under the bima from the rabbi during his bar mitzvah lessons. That anecdote, of a young boy hiding from the rabbi, wove its way into the story and then I started asking, why is the brother hiding? It became clear to me that Zach had a lot of quirks and special needs.

TWM: Let’s talk about Jesse, Lauren’s love interest. How did you develop him?
LL: Jesse was first modeled on a cute boy I remember from high school who played basketball and sat near me in biology. I sometimes begin a character based on someone I know and then as I develop them, they take on their own personality and traits. I didn’t really know that boy in high school, so I had to imagine him. In my mind, as I imagined him talking, he became the cocky character of Jesse.

TWM: What was the rationale behind using first person for Lauren’s voice?
LL: I wrote Lauren in the first person because I wanted that intensity of her voice and to show the process of her decision making. As soon as I started writing her character I could hear her voice in my head and I wanted to share it with readers.

TWM: What was your goal with this book?
LL: My goal with this book was to think about Jewish identity and what affect the Holocaust has on Jewish teens today. Lauren is an extreme example because her father is a Holocaust historian and her life has been more immersed in Holocaust education that most teens. Still, standard Jewish education has a strong emphasis on Holocaust history, often at the risk of short-changing other interesting time periods. I wanted to think about what happens to a Jewish teen when there is too much emphasis on tragedy and how that can overshadow other aspects of Jewish heritage.

TWM: What emotions did you want your reader to feel?
LL: I wanted readers to feel Lauren’s conflict, to understand what it feels like to want to fit in and then have to stand up for your religion or culture. Lauren is sick of hearing about the Holocaust, but she doesn’t want the Holocaust to be belittled either. I think a lot of teens (and adults too) feel a tension between their cultural and secular lives.  This tension can obviously be negative, but it can also be fascinating and I wanted my readers to experience these emotions along with Lauren.

TWM: The narrative has a soft side, e.g., Lauren’s relationship with her brother, and a hard side, e.g., cutting school, drinking and smoking, setting fire to the book about Mengele’s twin experiments. Was this mix intentional? If so, why?
LL: Yes, this mix of hard and soft sides of Lauren was intentional because Lauren is a multi-dimensional character and she has a pretty complex life. She’s a teenager exploring her boundaries, experimenting with alcohol, but she also cares for her family.

TWM: What challenges did you encounter in concepting and writing this book?
LL: The book was originally longer and Lauren had a greater obsession with fire. My editor worried that Lauren sounded like a pyromaniac. I had to cut a lot of it out as it was too heavy-handed, and also a little hard to believe.

TWM: What satisfactions did you feel as a result of writing this book?
LL: I was really pleased that I was able to wrestle some of my conflicting feelings about the Holocaust and Jewish identity into a novel. I was especially pleased that my father liked the book. Although he is not a Holocaust historian like Lauren’s father in the book, he reads a lot of Holocaust books and it was important to me that I wrote a book that he was proud of.

TWM: Now let’s turn to Leanne’s editor, Sarah Harvey at Orca. Hi, Sarah. What attracted you to Lauren Yanofsky Hates the Holocaust?
Sarah Harvey (SH): I was attracted to LYHH by the quality of the writing, the originality of the story and the strength and humour of the main character. Also, I like working with Leanne.

TWM: What appeal do you think the book has to mainstream readers?
SH: If by mainstream readers, you mean non-Jewish readers, I think that LYHH has broad appeal in that it deals with issues that many teens can relate to—changes in friendships, new love, family problems, bad hair days—as well as the larger ethical and moral issues that arise because of Lauren’s heritage.

TWM: Were there any particular challenges in developing/publishing the book?
SH: We were always aware that some of the subject matter might be controversial (Leanne doesn’t shy away from that, and neither does Orca) so there was quite a lot of discussion, with Leanne and in-house, about making the book as appealing as possible to a wide range of readers, without diluting the powerful material. That said, we all did what we always do—made the book read as well and look as good as possible.