The Whole Megillah presents an interview with Esther’s Hanukkah Disaster author, Jane Sutton, and illustrator, Andy Rowland. The book was published in 2013 by Kar-Ben.

The Whole Megillah (TWM): How did you come up with the idea for the story?
Jane Sutton (JS): It evolved from an increasingly elaborate bedtime story I used to tell my own children.

TWM: What gave you the idea for animals instead of people?
JS:To me, animals are inherently funnier and lend themselves to entertaining illustrations. Also, animals have clear characteristics that make certain gifts unmistakably silly, e.g., a jogging suit for a turtle. With a human recipient, it might be mean-spirited to hint that a jogging suit would be inappropriate, if you catch my drift.

TWM: Did you envision Esther as a purple gorilla, or Andy, was that you?

JS: Esther was definitely a gorilla in my mind, but the awesome color purple is all Andy.

TWM: Jane, did you have any particular challenges while writing the story?
JS: One challenge was to remind/inform readers of the significance of Hanukkah in a succinct way, so as not to slow down the plot. I was glad that the publisher included additional information about the holiday in the back. Another challenge was coming up with gifts a gorilla would like. By the fifth one, I was a little stuck; then I thought, Of course! A costume of a human!

TWM: What was your greatest satisfaction?
JS: I think the story conveys several serious messages but in a subtle way. What are these messages, you ask? That putting oneself in the place of others (empathy) is crucial and that presents at Hanukkah time are not nearly as important as remembering the reason for the holiday or as getting together to enjoy the lovely traditions with people (OK, animals) you like.

TWM: Who inspires you?
JS: Too many people to name, and if I leave certain people out, they might sue me.

TWM: What does Esther sound like when you write in her voice?
JS: This particular gorilla’s voice sounds like the lady who ran the deli where I ate lunch in high school when I needed a break from the school cafeteria. 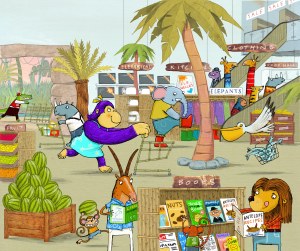 TWM: Andy, what was your reaction when you read the text? How did you decide to illustrate with such humor? I particularly like the shopping lists, the books on the bookshelves, and my favorite, the lion and antelope at the book stall. I also admire the detail, for instance, the size of Oscar the elephant’s tusks showing he’s young and Esther’s tongue sticking out while she writes, which many kids do.
Andy Rowland (AR): As soon as I read the script for Esther’s Hanukkah Disaster I knew this would be a fun book to illustrate.  I usually have to read a text a couple of times or so before ideas begin to form but with Jane’s  story I immediately saw that here would be lots of opportunities to develop humorous situations. The more I worked on the book the more ideas came, to the point that I wasn’t able to include them all! That is the test of a good story, it sparks the imagination, for the illustrator as well as the reader, and it’s my job to bring out what isn’t said in the text, whilst keeping faith with the story. It’s also thanks to Kar-Ben for giving time and space to do the book right. So many publishers work to short deadlines (and short fees) these days that the quality of work suffers in the end.

TWM: Did you conduct any research?
AR: Visual research is very important, try to make things up and it will show, it won’t look right. I made lots of sketches of real animals before translating those into the characters.  The way Esther and the other characters moved had to look right even though they were humanised.

TWM: How long did it take to develop the illustrations?
AR: I like to include a lot of detail to keep the reader on the page soaking up the story rather than speed reading through the book. The world the characters inhabit is unreal in one sense but one ﬁlled with real-life observations, such as the details in the shopping mall or the us of mobile/cell phones. (Did you notice the banana logo on Esther’s phone instead of the apple?)

TWM: What medium did you use?
AR: Even though the images are generated on the computer I still prefer to keep that hand drawn quality to my illustrations. All the characters are drawn in pen before being scanned into photoshop where the image is coloured. But there is still a lot  of work to be done, the image is drawn into, textures are scanned in, more detail added to ﬁnally produce a rich, layered, three dimensional visual feast to keep the eyes occupied!

TWM: Jane, what was your reaction when you saw the art?
JS: I had a grin as big as Esther the gorilla’s at her splendid Eighth Night of Hanukkah party.

TWM: Did the two of you have any correspondence or conversations?
JS: Not until after the book was published. I wrote Andy to thank him for his absolutely wonderful artwork that adds so much to the story.

TWM: Will you be doing any joint promotions?
JS: Not aware of any, but I’d be delighted to do some.

Jane Sutton is the author of eight children’s books. Growing up (although she never completely grew up) on Long Island, Jane wrote stories and essays and developed a sense of humor to deal with the indignities of childhood. At Brandeis University, she majored in Comparative Literature. Her other titles are three picture books, The Trouble With Cauliflower, Don’t Call Me Sidney and What Should a Hippo Wear, three middle-grade novels, Me and the Weirdos, Confessions of an Orange Octopus and Not Even Mrs. Mazursky, and one YA novel, Definitely Not Sexy. Jane is also a writing tutor, teaches a Lexington Community Education class on writing for kids, and gives author talks in schools, bookstores and libraries. She and her husband, Alan Ticotsky, an educator and science author, live in Lexington, MA and have two grown children who live in the Boston area.
Jane’s website: www.jane-sutton.com

Andy has always loved drawing, One of his earliest memories is of his dad bringing home reams of scrap paper from the printers for him to use because he went through so much. Eventually he went on to study Illustration at Manchester Metropolitan University, where, during his second year he won the  Macmillan prize for the design and illustration of a children’s book. Since then he has worked freelance mainly on children’s books, illustrating over one hundred for clients such as Bloomsbury,  Macmillan, Usborne, Hachet, Lerner, Pearson, Franklin Watts, OUP and many others.  He has also worked artistically in the voluntary sector with drug and alcohol users as well as mural work, portraiture,  printed products and surface pattern design. Andy lives in Greater Manchester, England with his partner and daughter.