Flanders House Book Presentation | The War Within These Walls 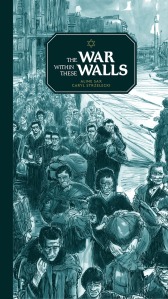 I had the privilege of attending the Flanders House book presentation on The War Within These Walls, written by Aline Sax and illustrated by Caryl Strzelecki. The book received a 2014 Sydney Taylor Honor Award in the teen category. It also won the Jewish Book Council’s National Jewish Book Award 2013  in the Children’s and Young Adult Literature category and was named a Batchelder Honor Award 2014 by the American Library Association. I attended as a representative of the Association of Jewish Libraries and the Sydney Taylor Book Award Committee.

Flanders House is located in The New York Times building on

I was delighted to meet Aline and Caryl in person. The event started with an interview by Flanders House Arts & Culture representative, Mieke Renders. They spoke of their collaboration and interest in the Holocaust, Warsaw Uprising and World War II subject matter. Their collaboration was clearly a confluence of skill and passion. One of the key sources was a collection of “illegal” Warsaw Ghetto photographs taken by an off-duty German soldier. These may have been from Heinz Jost.

This was followed by an unexpected segment: Aline read a selection of the book while Caryl illustrated in real-time. This was a real treat. As a palate cleanser, so to speak, music of Ilse Weber — a children’s book author, musician and nurse interned at Theresienstadt and later executed at Auschwitz — was piped in. The song, “I Wander through Theresienstadt,” asked when would the suffering end.

Aline then returned to reading another selection while Caryl illustrated. And another Ilse Weber song played, this one, “Wiegala,” sung while entering the gas chambers with children.

Aline’s reading reinforced the lyrical quality of the verse. Caryl demonstrated his unique skill to capture the personality and mood of the Jews of the Warsaw Ghetto.

Questions from the audience rounded out the program, including mine about working with Laura Watkinson, who translated the book into English. Exquisite food and libations followed.

Thank you to Flanders House, publisher Eerdmans, Aline Sax and Caryl Strzelecki for a great event. Thanks also go to Association of Jewish Libraries president Heidi Estrin for giving me the opportunity to attend.