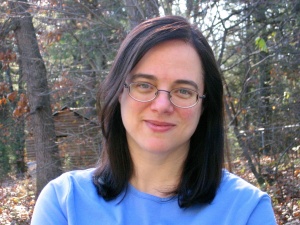 The Whole Megillah (TWM): How do you plot your novels?
Susan Lynn Meyer (SLM): I figure out the climax and then I work backward from there, building all the different threads up to it.  Sounds easy, but it’s HARD!

TWM: Did you know when you wrote Black Radishes that you’d be writing Gustave’s journey to and experiences in America?
SLM: No, I didn’t have any such idea. I also didn’t know, when I wrote it, that Black Radishes would ever be published—it is just a book that I absolutely had to write, no matter what.  But then, after acquiring Black Radishes, my wonderful editor, Rebecca Weston at Delacorte, asked me if I might want to continue the story.  And my father (whose life inspired both novels) had some more good anecdotes—and I decided I did!

TWM: I understand you’re a professor of English at Wellesley College. Does your academic life affect your personal creative writing? If so, how?
SLM: One big effect, of course, is that my job takes a lot of my time.  It’s really hard to find enough time to write.  But there are also wonderful advantages.  I’m an obsessively meticulous researcher, and I have access to a terrific academic library and research librarians, who have been tremendously helpful.  I also have contact with young, eager students, many of them aspiring writers—and that can be really energizing.

TWM: When did you know that you wanted to write about your father’s experiences for children?
SLM: I think it had been growing in me a long while before I began writing.  I grew up hearing my father’s stories about his French childhood, his family’s escape from Nazi-occupied Europe and his early experiences in America.  Those were very foundational stories for me, ones through which I made sense of the world.  It was so hard for me as a child to get my mind around the fact that people would want to kill my father and his family.  My father made sure to reassure me and my brothers and sisters that it was a long, long time ago and that it could never happen here.  I also remember him telling me that I didn’t look Jewish—I didn’t want to hear that, but for him it seemed to be a good thing—it meant safety.  Now that I am an adult and my own childhood feels still very close, I realize that those days couldn’t possibly have felt as remote to him as he reassuringly made it sound to his young children.

My father was deeply grateful to America for saving his life, but he was also dismayed by racism against blacks in America.  The idea that blacks couldn’t eat at certain restaurants and lunch counters particularly made his blood boil.  My parents took some of us kids when we were very small to civil rights rallies in Baltimore, where he remembered hearing John Lewis speak and he also remembered seeing men from the FBI with telephoto lenses taking photographs from inside a store front.  (I really wish I had those photos now.)

TWM: How did you combine the oral histories of your father, aunt, and other refugees with written memoir as your source materials?
SLM: For this novel, I found far fewer relevant memoirs, though I did read some from other immigrants who arrived here from other countries and at other times just to get a sense for what the immigrant experience felt like.  I used more oral history for this novel, more interviews with my father and aunt.

I did find a memoir or two that mentioned Joan of Arc Junior High, and I found a memoir about the Stage Door Canteen, a volunteer-run free canteen in New York for the entertainment of U.S. servicemen.  This was relevant when I was researching what the likely response would have been to a cross-racial couple dancing together.  The young women who volunteered there were told to dance with any GI who asked them to dance, regardless of race.  The implication was that this was not how they would otherwise have behaved.  Skirmishes broke out a few times because of inter-racial couples dancing together.  This confirmed my sense that Gustave and September Rose likely wouldn’t have been able to skate hand in hand without some harassment.

My greatest satisfaction was how vividly the character of September Rose came to life for me!  I also really enjoyed inhabiting and telling some of my father’s stories, like the singing test by the music teacher on Gustave’s first day, the girl who came up and flirted with him, to his bewilderment, and the incident on the train with the man with the gold corners on his suitcase.  All quite true!  (Though I did change what the girl said to make it more intelligible to present-day kids.)

TWM: Please describe any special challenges in writing a sequel.
SLM: I found the change in mood from the first novel to the second to be quite difficult.  In the second novel, Gustave really had to face what may have happened to his best friend Marcel, who is still in France—and I did too.  I had to make a clear decision.  I had deliberately left that ambiguous at the end of Black Radishes.

TWM: Did anything surprise you in writing Skating?
SLM: I was surprised that I found it in some ways harder to imagine the 1940s in New York than the 1940s in France.  This is partly because the little French village where much of Black Radishes is set is still very much like the way it was in the 1940s.

TWM: What authors inspire you?
SLM: I really admire Cynthia Voigt’s Homecoming series and Jacqueline Woodson’s books, especially Hush and If You Come Softly.  Both of them have characters who feel absolutely real and alive to me.  So do some of Madeleine L’Engle’s characters.  And they write novels of substance—ones that you think about long after you finish reading them.

TWM: Is there a third book in the making about Marcel in hiding?
SLM: Right now I’m working on a new novel on a completely different subject—it is set in the general Boston area in the early twentieth century.  I needed a break from the emotional intensity of writing about my family’s history.  But my editor, Rebecca Weston, had been very interested in a third novel connected with these two.  Maybe at some point!  Or it might be about Nicole and her work in the French Resistance.

1 Response to Author’s Notebook | Susan Lynn Meyer, Skating with the Statue of Liberty