A Different Kind of Passover
Written by Linda Leopold-Strauss and illustrated by Jeremy Tugeau (Kar-Ben, 2017)

The Whole Megillah (TWM):  What inspired you to write A Different Kind of Passover?
Linda Leopold-Strauss (LLS): When I was a child, Passover was one of my favorite times of the year—my family would drive from Philadelphia, where we lived, to New Haven, Connecticut to spend the holiday with my grandparents and aunt and uncle and cousins.  I remember vividly practicing the Four Questions in the car, reciting them over and over.  I remember running up the stairs to my grandparents’ second-floor flat, sleeping on the floor in the living room with my cousins, the bowl of nuts and the nutcracker that were always on the coffee table, washing the two sets of Passover dishes and worrying that I might mix up the meat dishes with the milk dishes, celebrating the end of the holiday with sundaes at Clark’s Dairy.  In addition to the formal rituals, these were the traditions that defined the holiday for me—always the same, despite the words about Passover night’s being different from all over nights.  And then one year my grandfather had a heart attack and absolutely refused to stay in the hospital and eat chometz, so they let him go home after he promised to stay in bed; at that time, heart attack patients had to stay in bed for something like six weeks.  So something about the holiday traditions had to change.  That set up the conflict in the story—“the same” v. “different.”  The way the story played out in A Different Kind of Passover is fiction, but the inspiration for the story is in that piece of my family history.

TWM: How do you get your ideas for picture books?
LLS: The idea for A Different Kind of Passover, as noted above, came from my family history.  The idea for The Princess Gown (Houghton Mifflin, 2008) came from my husband’s family history—his great-great grandfather in England, Victor Abraham, was Embroiderer to the Queen, and the story that was passed down was that each of the many children in Joseph Abraham’s family put a stitch in Queen Victoria’s wedding gown.  The actual story, as I pursued it, seemed to be that Joseph Abraham embroidered the covering for the throne Queen Victoria sat on for her coronation, and each of the children put a stitch in that, but I went with the wedding gown version for my story. 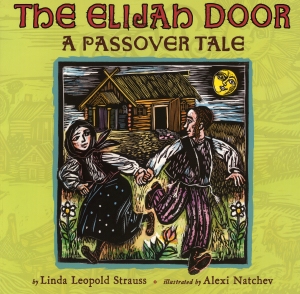 The idea for The Elijah Door (Holiday House, 2012) was a visual:  I was taking a walk and a break from preparing for Passover one year, wondering where we were going to put the guests, thinking about how many families had even larger seders and therefore larger logistical problems, when I saw two houses side by side up on a hill.  What if the owners just opened the doors and let the seder spill out? I wondered.  And what if the two side-by-side seders met in the middle?  I’m not sure why I decided to set this story in an Eastern European shtetl—it just came out that way.  (As stories sometimes do!)

And one more: The idea for Preschool Day Hooray! (Scholastic/Cartwheel, 2010) came from the label on a bottle of barbecue sauce!  Sticky Fingers barbecue sauce!  I loved the sound of that; thought children would, too.  So one day while I was walking (my favorite time for inspiration), I started playing with sounds:  prickly rose, licky lolly, clucky hen, lucky clover.  After I’d assembled a bunch of these phrases, I realized I could pick and choose and create a kind of poem that was “a day in the life of” a small child.  And then my editor at Scholastic asked me to pare it down to a school day, which I did.

TWM: You’ve been writing for children for more than 40 years. What changes have you seen?
LLS: The change that perhaps has affected me most is the demand for manuscripts that are shorter and shorter.  Picture story books, which are what I started out writing (and which I still love to write, and read), are increasingly harder to sell.  I’ve been very lucky to get a few under the wire, but they seem to be a dying form.  Also, I think the fact that library and school budgets have been drastically cut has put the bookstore consumer more in the driver’s seat in terms of marketability of manuscripts.  And finally, with cutbacks in staff, many fewer publishing houses are accepting submissions from non-agented authors.  The number of houses to which an author without an agent can submit is significantly smaller than when I started writing.

TWM: Do you have an agent? Tell us about how you found one and how the process works for you.
LLS: I do not have an agent.  I did for a year—long ago.  My agent was a former editor, and she worked with me on revising A Fairy Called Hilary to her specifications, but the manuscript that resulted didn’t sell.  Ultimately I sent her the original manuscript again and at her suggestion, submitted it to Cricket magazine for possible serialization.  Cricket accepted it, and after the first episode appeared, Holiday House contacted me about publishing it as a book.  As originally written.  At that point, my agent and I amicably parted ways, and I’ve been submitting on my own ever since.

TWM: What is your advice for aspiring picture book authors?
LLS: First of all, read, read, read.  Read what’s being written and published today: Today’s books are probably shorter, snappier, possibly edgier, more “modern” than that books you read as a child.  Also read about how to write a picture book—there are lots of books out there with good advice.  Format matters:  how a picture book is structured, 32 pages, focus on page turns, memorable character and story arc needed, etc.  A picture book is not just an illustrated story.  Unless you are an illustrator yourself, you will be leaving choice of illustrators up to an editor who buys your manuscript, but you need to leave room in your manuscript for illustrations.  Polish your manuscript till you are certain it’s the best you can offer before you send it out.  Join or form a writers’ group to get some outside opinions on your work.  Go to writers’ conferences; nowadays, editors who speak at such conferences often invite attendees to send them work, though otherwise the house may be closed to non-agented writers.  It’s a good way in. And most of all, be patient; be persistent; don’t give up!

For more about Linda Leopold-Strauss, please visit her website.