Posted on September 19, 2017 by Barbara Krasner

I had the pleasure of meeting author Tammar Stein at the August Tent: Jewish Children’s Literature program at the National Yiddish Book Center in Amherst, Mass. She was able to take time out from her busy schedule to talk about her middle grade novel, The Six-Day Hero (Kar-Ben, 2017), which is both a PJ Our Way and Junior Library Guild Selection.

On to the interview…

The Whole Megillah (TWM): What motivated you to write this story?
Tammar Stein (TS): It started with a phone call from my mom. Her rabbi had approached her to ask about a book I’d written. He couldn’t find any books about Israel for his 5th graders and he wondered if my book Light Years might suit. But up until then, all my novels were for an older audience, so Light Years wouldn’t have been a good fit for that age group. Of course my mom told him that, but on our call, she followed it up with some career advice: “You should write something.”

I don’t usually write to order. It takes me a long time to write a book, at least a couple of years. Any book I write has to be something that I feel really passionate about, because two years is a long time to live with lukewarm feelings towards a manuscript. But something about my mom’s suggestion really resonated with me. How could there be nothing about Israel for this age group? I lived in Israel for part of my childhood, and those childhood years were really happy ones. I started feeling inspired to create a book that American kids who had never been to Israel, who perhaps had never met an Israeli, could read and by the time they finished, they would feel like they had a friend there. 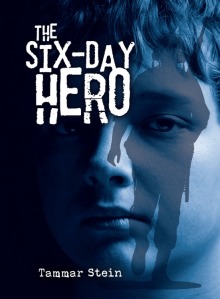 TWM: How did you conduct your research for the book?
TS: I started by interviewing my parents. My dad was an 18-year-old IDF soldier during the Six Day War. My mom was a teenager in Haifa. After hearing their experiences, I found other Israelis to interview. This past summer was the 50th anniversary of the Six Day War, which meant there are still many first-hand narratives. It was a deeply moving experience for me to listen to them remember what happened to them. The fear. The uncertainty. The determination. And then the euphoria of the war’s aftermath. Some of the people I interviewed had not spoken, or even thought, about those memories in decades, but the emotions were still powerful and raw.  I worked hard to capture those feelings in the book.

I also read newspaper articles from the time period so I could follow along in “real time” as events unfolded, what people thought about what the future could hold. And I read books that analyzed the lead up, course and aftermath of the war.

TWM: At the heart of the novel is the relationship between brothers. What did you draw on to develop this?
TS: I believe that sibling relationships are among the most powerful in a child’s life. A sibling can be a source of tension, rivalry, envy, friendship, and understanding. Sometimes all in the same day. Israeli families tend to be tightly knit. From the minute Motti popped into my head, I knew we would know him as part of a unit, his brothers really define who he is to himself and to the world around him.

TWM: What was your greatest challenge in writing this story?
TS: It needed to be a pager turner for modern day kids, but also be compelling for anyone who had lived during that time period who would read it. I wanted to bring to life the sights, sounds, smells and tastes of West Jerusalem in 1967. It felt very important that I get the details right. Luckily, my parents were a huge resource there. I would call them literally as I was writing the scene. What color was the Egged bus? When would the stores open after the afternoon siesta? How many flavors of ice cream would a store have?

The other challenge, of course, is that it’s a book about war for kids. I wanted to make sure that the intensity, the high stakes, the danger all came through. But at the same time, keep it firmly appropriate for the Elementary and Middle School crowd.  I think The Six-Day Hero strikes that balance.  I have had many readers, including kids, tell me that they just could not put the book down.  It is thrill to hear that people are tired because they stayed up all night enjoying Motti’s story.

TWM: What was your greatest satisfaction?
TS: I’ve always believed that stories are what connect us. It’s the reason I wrote this as a historical novel instead of non-fiction. You can present someone dates and facts but if it doesn’t touch their heart they won’t remember it. Yet if you share a story with someone, especially an interesting, gripping story, they’ll remember it forever.

It’s been so gratifying to see the response from readers. I’ve gotten so many emails from young readers and their parents. My favorite so far was from a woman whose mom lived in Israel during the Six Day War. Apparently, her mom had always talked about the buses, but her daughter had never really understood what she meant. Once she read The Six-Day Hero, the buses were put in context with a story. With everyone dependent on public transportation for everything from a grocery run to school or work, and with most of the bus drivers getting called to active duty, there were suddenly very few buses running. Instead of a bus every 10-15 minutes, it would take an hour or more for a bus to arrive. There’s a scene in the book that shows this happening to Motti and Beni and how disconcerting it was. Now that the issue of the buses was put in context for her, the daughter suddenly understood her mother’s experience.

TWM: Now that you’re working on the sequel, are there any particular challenges? Did you have multiple books sharing a cast of characters in mind when you wrote The Six-Day Hero?
TS: I’ve always thought it would be fun and compelling to show the history of Israel through the experiences of one Israeli family. With Israel celebrating its 69th year, its history is compact enough that you can cover it all in three generations. So I did have that thought in the back of my mind as I wrote The Six-Day Hero.

TWM: Do you get any inspiration from other authors? If so, who?
TS: I’m a huge reader. Before I was a writer, I adored reading books. I have a distinct memory of my mom scolding at me to stop reading and go play outside. (I refused.) To this day, a good book is a refuge, a comfort and a source of inspiration. I’m pretty indiscriminate about who or what I read. If it has heart, I love it.

TWM: Do you have a critique group? If so, please say a few words about the help you get from them.
TS: I do have a critique group. In fact, right now I have two, which is a real embarrassment of riches. But they serve different functions. One of them is mostly for picture books and early chapter books. My middle grade critique group is made up of three amazing authors: Kristin Levine, Pamela Ehrenberg, and Caroline Hickey. These ladies are phenomenal readers. They’re part editor, part cheerleader, part therapist. They diagnose weak scenes, uninspiring characters and unconvincing motivation. They help me know when I’m on the right path and when I need to take stock and regroup. Our monthly meetings are always incredibly helpful and have definitely made my books stronger and better.