Author’s Notebook | When We Were Shadows by Janet Wees 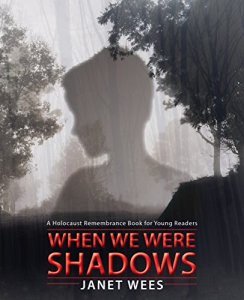 The Whole Megillah (TWM): What prompted you to write this book?
Janet Wees (JW): When I visited the memorial site of The Hidden Village in the mid-2000s, it affected me more than other sites I’d seen; it gave me a lump in my throat and in my gut, and a desire to find out more. I looked for information and was put in touch with people who knew the history and could talk to me. The last time I visited the site in 2008, I had just interviewed the person whose experiences inspired the novel, and I sat inside the replica huts trying to imagine how he felt as a young boy, remembering what I’d heard from him. As a former teacher, I also knew that my students’ highly developed sensitivities would allow them to identify with the boy, and understand why what happened was so wrong. And I knew I had to write this story for their children.

TWM: What were the greatest challenges? The greatest satisfactions?
JW: The greatest challenge was getting the voice of a 9-year-old boy out of a 60-something woman. The first draft was straightforward but was a story being told in an adult voice. I had to develop a younger voice with its wonder and words, thoughts and emotions. If I wanted children to read the book, I had to appeal to what would affect their involvement with the character. Since I had never experienced anything like what the boy experienced, it was difficult to put myself in his place and to talk about it. It had to become more personal for me, so I had to think about what I was like at 9 years old. And the idea of letters came up. I lived in a small village as a child and my contact with the “outside” world was through letters. I had pen pals, cousins, and grandmothers. I didn’t have a diary at that time, but I poured my heart out in my letters and shared everything in my life with my letter friends. Once that idea was enmeshed, I tried to carry over some of the elements of a boy in Holland to a girl in Canada. It took awhile but they eventually became one person, living the stories I’d heard.

The greatest satisfaction has been the reaction of young readers to the story. As a writer, I am quite sensitive to feedback. Nobody read my drafts for 6 years because I was afraid of how I would respond to criticism. It feels like I have stepped away from the book (after hundreds of readings, re-readings, edits, proofings), and it’s interesting to see what the readers see with fresh eyes, and it’s always a surprise to me when I hear praise for the book. When writers get rejection after rejection and finally get an offer for publication, it’s almost surreal. It feels like Sally Fields’s Oscar speech – “You like me; you really like me”, but it’s more “You like the book; you really like the book!” It was for children that I wrote the book, and it’s their feedback which gives me the most satisfaction. Of course, it doesn’t hurt that adults who have read it also like it. It’s boosted my confidence to the point where I can now think of myself as a writer.

TWM: I understand some elements are fictionalized and the survivor’s name has been changed. Can you talk about the rationale for this?
JW: When I interviewed the person on whose stories the novel is based, he told me to fictionalize to fill in the gaps as his memory could not remember everything. Along the way we emailed until it got to the point where it was too painful for him to remember, so I stopped asking him questions and used research and my imagination in places. The survivor’s name was different at first, and when the publisher accepted the book for publication, they asked if they could use the real name of the boy on whose experiences the book was based.

TWM: Did anything in your interviews with the survivor affect or transform you/your thinking in any way?
JW: Until I met the survivor, I had little knowledge of how the Holocaust affected my family. I knew the history and as a Jew it affected me deeply. As the only Jewish child in my elementary school, I faced anti-semitism frequently, and often found myself wondering, as Walter did, “What is wrong with being Jewish?”I discovered in the 1990s that my grandmother had lost family in the death camps, and that we had descendants from those victims still living in Ukraine. Suddenly, the Holocaust became more personal to me. Up until 2008, I’d never really met a survivor, so those four days in Ze’ev’s dining room, interviewing him, brought it all home to me. I was seeing and hearing through his eyes and ears. I remember feeling angry about what was inflicted upon him, and feeling like I wanted to protect him from the memories. I still feel that.

The interviews solidified my resolve to educate people about the Holocaust from a more deeply personal viewpoint instead of a factual article in a newspaper. I remember sitting at Ze’ev’s table crying with him. He said it brought it all back to him every time he spoke to a group of school children, and I said I hoped that my book would allow the children to read about it, perhaps relieving him of the emotional reliving of the experiences.

I feel resolved now that any other books I write have to incorporate and tell the story about the victims of the Holocaust and those people in the Resistance who risked their lives to save lives.

I just heard a story about a 61-year-old woman who, unbelievable as this sounds, knew nothing about the Holocaust. She went to a book presentation last week about Hana’s Suitcase (Second Story Press, 2002) and learned for the first time about the horrors of that time. Apparently she has not been able to sleep since. I can’t imagine how it must feel to be an adult and not know, then find out; I don’t want children to grow up and not know.

When We Were Shadows was published in April 2018 by Canada’s Second Story Press as part of its Holocaust Remembrance Series for Young Readers.