The Whole Megillah (TWM): What inspired you to write Resistance?
Jennifer Nielsen (JN): I stumbled upon the story while exploring the former Jewish ghetto in Krakow. A sign on one wall referenced the theater underground during the German occupation. Being a theater major, that intrigued me, so after I was home, I tried to find out more information. That research led me to the story of a little known resistance group in Krakow, largely made up of Jewish teenagers and known as Akiva. The more I learned, the more I knew their story had to be told.

TWM: How did you conduct your research?
JN: Solid research was vital to writing Resistance. I wanted to keep the details as close as possible to actual history and unfiltered through the lens of other retellings. Certainly, I drew upon all that I had learned and observed in my own travel to Poland, but for additional research, whenever I could, I used first person resources – the story as told by those who lived it.

For example, the story of the Akiva resistance movement was first documented by a woman named Gusta Draenger, who was part of the leadership. After she and her husband were arrested, she recorded her story on scraps of toilet paper which were smuggled out of the prison. Her words later became a book, Justyna’s Narrative, and was a primary resource for me in understanding how Akiva thought and operated.

As much as possible, I went into the extreme details. I have a sewer map of Warsaw from 1943 and overlaid it with the ghetto map to find entrance and exit points. I found a video of a woman who had survived the Warsaw Ghetto Uprising who described fighting from what had once been a furniture store, so that detail is noted in the book. I followed actual train lines, roads, and ghetto boundaries.

When first person narratives weren’t available, I turned to resources such as the archives of Yad Vashem, the United States Holocaust Memorial Museum archives, the Jewish Virtual Library, and other organizations dedicated to recording and preserving Holocaust history.

At the end of my research, I had such a thick stack of notes, I needed a way to organize it. So I created a timeline out of poster boards, and placed it on the wall of my office (now known as the Research Wall), and created a second poster board of pictures of the actual people who resisted. I wanted a constant reminder that I was writing about real people who lived actual lives. 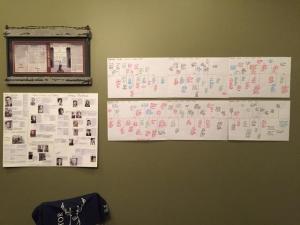 TWM: How was the research vetted?
JN: Resistance went through many layers of vetting, and was fact-checked by Tami Rich, a Historian and Cultural Heritage Advisor, who was formerly a curator at Yad Vashem and is currently on the faculty of Haifa University’s Holocaust Studies MA program.

TWM: What were your greatest challenges and satisfactions in writing Resistance?
JN: Even from original concept, this was the most challenging book I’ve ever undertaken, because I knew I was writing about real events, and sensitive events, and I understood that I had to get it right. I also knew that I was writing in a topic where much has already been written, and where much has yet to be written, and my hope was that this story would stand out on its own.

As I immersed myself in the writing and the world of 1943 Poland, I grew to love these characters so much and became emotionally attached to their journey. One of the greatest satisfactions for me came late in the story when these same characters begin to define their victory—finally taking back control of their lives, regardless of when and how they ended.

I have such deep respect for the couriers and resistance fighters, to have been able to write about them at all, adding to their three lines of history, is the greatest satisfaction of my career.

TWM: What do you hope readers will take away from Resistance?
JN: I hope readers will see that there were many ways in which the Jewish people resisted the Nazi regime. Resistance was continuing Sabbath worship, it was setting up safe houses or hiding in them. Resistance was singing in the prison yard to mask the conversations inside the barracks, smuggling food into the ghettos, and sabotaging German goods on work duty. Resistance was risking one’s life to pass on forged identification, or shouting Shema Yisrael in defiance at the end of life. There were some who fought, but many more who resisted.

I want readers to see the courage, heroism, and valor that defined the young Jewish couriers, those who fought in the Warsaw Ghetto Uprising, and all those who determined that if they would not kneel to the enemy, then they had to resist him.

TWM: What writers inspire you?
JN: I read widely and draw influences from many sources. The authors that may have impacted me most heavily for Resistance include Ruta Sepetys, Elie Wiesel, Viktor Frankl, and Markus Zusak.

TWM: Thanks so much, Jennifer. Now a few questions for Lisa Sandell, Editorial Director, Scholastic Inc. and Ammi-Joan Paquette, Literary Agent with Erin Murphy Literary Agency. Lisa and Ammi-Joan, thanks for joining us. What attracted you to this story?
Lisa Sandell: The story of the Warsaw Ghetto uprising has always compelled me—the determination of a handful of young people in the face of unimaginable terror and violence to survive and resist is remarkably inspiring. And I knew that in the very capable and talented hands of Jennifer A. Nielsen, those lives (and deaths) would be honored and represented with dignity and truth.

Ammi-Joan Paquette (AJP): As Jennifer’s agent, I have the distinct honor of getting a sneak peek at her projects earlier than most readers. When she described this project and its origins to me, I knew immediately that this was a story that must be told—but what really drew me in as I began to read the finished draft was the power of these characters. Truly unforgettable!

TWM: What is your general reaction to Holocaust narratives for young readers?
LS: As the great-granddaughter of Holocaust survivors I have been immersed in Holocaust literature my entire life. I know that these narratives hold immense power for young readers, as they relate stories of courage in the face of unlikely odds, survival despite the most devastating of circumstances, and portraits of the furthest extremes of human behavior. Moreover, I think it is crucial to continue to educate young readers about this corner of history, so that we never repeat it.

AJP: It is so important that these stories are preserved, that they continue to be told. As the years go by, I truly believe that the only way to keep the horrors of the past from being repeated is to keep them alive, so that future generations can know, and learn, and hopefully do—and be—better.

TWM: What do you hope readers will take away from Resistance?
LS: I hope readers will come away from reading Resistance with a deeper understanding of the Holocaust, of the Nazi occupation of Poland and what that meant for the country’s Jews, and I hope that this portrayal of Jewish resistance offers inspiration and a sense of promise in the knowledge that young people can make an important mark on history. And I hope readers find themselves captivated by an extraordinary story.

AJP: The power of the individual, that strength takes many forms, that quietness and endurance can be as powerful as force. That there are many unsung heroes, many untold stories. That we must never forget.