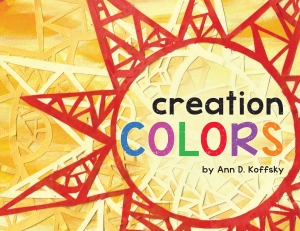 The Whole Megillah (TWM): What was your inspiration for this story?
Ann Koffsky (AK): A huge, blank wall. Really! My synagogue has a large blank wall just in front of where I typically sit, and as I stared at it each Shabbat, I tired to imagine what might look nice there. That blank wall really got me going, and I went forward and created the seven days of creation as a series of paintings, and then offered to them my synagogue—but my timing was pretty off. They were just beginning a large renovation, and art was not something they could consider—they were going to be knocking down the walls that the art might go on! So instead, I offered it to the day school where my kids attended: The Hebrew Academy of Nassau County. The timing for them was perfect, and they were installed in their synagogue space.

I think it’s the best home for the series; I’m so pleased that kids get to see those 7 initial pieces each day. (And, I’m glad they get to fill a blank wall—even if it’s not the blank wall I had been staring at!) After I had created those seven pieces, I realized that they could naturally work as a part of a larger series telling the story of creation, and I worked on the text and created additional pieces that ultimately became Creation Colors.

TWM: Do you have a critique group?
AK: I have a group of friends that I show my work to and ask for feedback. Some back from my college days, some friends from my neighborhood. Their feedback is invaluable. And of course, my editor for this project, Dena Neusner, was a constructive critic as well.

TWM: Is the art form something you’ve done before? Can you say more about the process and the decision to use this form?
AK: For a long time, I have described my illustration work as having two styles: The first style is created with acrylic, textured paint and uses vivid colors. This is the style that I used most often for my picture books. For my second, I create paper cuts. This is the style I turn to when creating a Ketubah, Bar/Bat Mitzah gifts, as well as for greeting cards.

In this book, I smashed those two techniques together, and combined my painting with the cut paper. So, for example, in the “Blue page” I painted a canvas blue with large painterly textures and splatters. I then separately created an intricate, tight paper-cut of the waves. Finally, I laid those paper cuts on top of the textures, to create a juxtaposition of crisp lines against a free, painterly strokes. I’m really pleased with the outcome! I feel like I figured out a way to unify what was a split artistic vision. 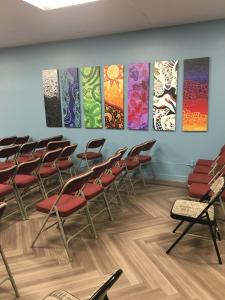 TWM: What was the greatest challenge in writing and illustrating this book?
AK: As an illustrator, I typically work on a project once I know it will be published. A publisher has approved a project for publication, they have given me a contract, and then I start painting. This project was different: I created the work, not knowing if anyone would display it, or if it would ever become a book. There was a high probability that I was going to complete the work, and it would end up in my basement. I found that very challenging.

TWM: What was your greatest satisfaction?
AK: It was very gratifying when the work did, in fact find not one, but two homes: both as this book and in the school. While working on the pieces, I also had a nice moment when I was figuring out the technique on that first piece. When I figured out the right glue, the right proportions, and got the paper onto to the painted canvas…that was a cool moment. I was like: hey—this is new—and it WORKS!

TWM: Who inspires you?
AK: Lots of folks! For this project in particular, the mosaics of the artist Antoni Gaudi were very influential. His vivid color, treatment of animals, and tile work inspired the shapes that I used to create the paper cuts. I am also very inspired by stained glasswork by Tiffany, the color of Georgia O’Keefe, the decorative qualities of Faberge…I could go on and on. For writing, I am very influenced by every amazing picture book that I read to my kids when they were young, and that list is quite long, too! Works by Eric Kimmel, David Adler, Leslie Kimmelman, Shel Silverstein, Crockett Johnson, David Wiesner, Mo Willems, etc, etc, etc!

TWM: Am I right in thinking that this text is the most lyrical you’ve done? What’s led to that?
AK: I think what led to that is this book was the first book that I’ve created “backwards”; it started with the art, and led to a text. And because of that, the art suggested a more lyrical, poetic approach than, say, my book Kayla and Kugel—which is a simple story of a girl and her dog.

For more about Ann D. Koffsky, see her website.