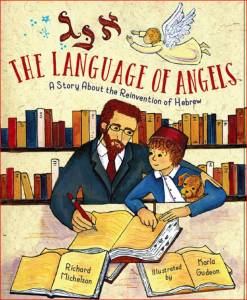 The Language of Angels: A Story about the Reinvention of Hebrew
Written by Richard Michelson and illustrated by Karla Gudeon
(Charlesbridge, 2017)

The Whole Megillah (TWM): What got you interested in writing about the invention of modern Hebrew? I see you include a dedication to Neil Waldman. Can you tell us about that?
Richard Michelson (RM): Let me answer the first two questions together since they are intertwined. When artist/illustrator/educator/mensch Neil Waldman and I were having lunch fifteen years ago while collaborating on Too Young for Yiddish (plug for my previous Charlesbridge book!), during the writing of which  I learned that the Yiddish language had evolved out of a mixture of Hebrew, Polish and  German and that Isaac Bashevis Singer proudly claimed that Yiddish was the only language without a word for “armaments,” I asked Neil his thoughts about whether a language without specific words for weapons would inhibit thoughts of violence. I don’t recall his answer but I do remember him casually mentioning the life story of Eliezer Ben Yehuda and his quest to invent words and make Hebrew the daily language of the Jews.  I was fascinated.

Imagine reviving Latin today and having everyone in Italy speaking it within two generations.  Hebrew had died out as a daily spoken language (aside from the prayers) during the time of the Maccabees. But Eliezer had this meshuggeneh idea that its rebirth could help unify the Jewish people. He had to make up words for everything that had happened in the past 200 years: ice cream, bicycles, and so on.  Imagine being Adam naming all the animals. And even more cockamamie, Eliezer wanted his son, Ben-Zion,  to be the first native Hebrew speaker in 2000 years, so he wouldn’t allow him to hear any language but Hebrew.  Which meant, of course, no friends. Ben-Zion wasn’t even allowed to hear the sounds animals make. His father would cover his ears when dogs barked or cows moooo-ed.   Child abuse for sure.  But how did it all end up? Read the book and find out.

Neil, who lived in Israel at one time, said: “I was going to write that story, but couldn’t find my way in. I now give you the idea as a gift.”  It took me fifteen years to find my way in. And so, the book is dedicated to Neil.

TWM: Thanks, that’s a great story. How do you decide what to write picture books about vs. some other form? Where do your ideas come from?
RM: I just think in the picture book form.  I am enamored of  the picture book, which combines my two greatest loves—art and poetry. When done well, it is a perfect marriage. I also write poetry geared toward teens and adults, and even the first drafts of my prose books are written in poetic form.  The language is always paramount, and that helps me get the rhythms down.  Later I will add the connecting tissue.

TWM: How much time do you devote to your writing? Do you write everyday? Who are your first readers?
RM: I wish I wrote every day, but I spend way too much time running my gallery, and checking Facebook, and walking the dog.  Then, as a function of age, I have to get in some stretching and exercising daily. Then dinners out with my wife, and I also like to sleep late.  And I accept too many speaking gigs and I answer too many questionnaires when I should be writing my books. These days we all seem to have full-time PR careers, and part-time creative jobs.  But in the end, I think a varied life is as important as spending all day writing.  The few times I’ve tried that I found I didn’t necessarily get more done in any case.

As to first readers, I don’t share much until I know the work is complete.  If I talk about it, I lose it. And I tend to know when something works, even though I often try to fool myself into thinking I am done, when deep down I know I am not. Then I will share with my wife and my editors.  And I learn that I still am not finished.

TWM: Who inspires you?
RM: I am inspired by people who get down in the trenches to make the world a better place. Tikkun-Olam. After Hurricane Katrina, for instance, I was in my study writing about it, while my wife went down to help poor families sheetrock and clean up.  (Bad on me.)  I am inspired by people I write about like Martin Luther King and Abraham Joshua Heschel (As Good As Anybody: Martin Luther King and Abraham Joshua Heschel’s Amazing March Toward Freedom), both of whom who put their lives on the line, and fought the good fight even when they were shunned by their peers. Heschel famously said: Words must be followed by deeds,”  and when he was out marching he felt “like my legs are praying.’  This is advice we especially must adhere to in these difficult political times.  I am inspired by people who break barriers, reach for the stars and still remember where they came from, people like Leonard Nimoy (Fascinating), Lipman Pike (Lipman Pike: America’s First Home Run King), and William Powell (Twice as Good).

TWM: For this book, did it have to be vetted by an expert? Will you be speaking in Hebrew when you do author visits?
RM: By many. For one thing, I don’t actually speak Hebrew (what! How can that be? Nor do I speak Yiddish which made for an interesting book tour for Too Young for Yiddish.) The book was vetted by Rabbi Eliezer ben Yehuda, grandson of the man I wrote about, and a scholar of the Hebrew language himself.  We also had invaluable help from the PJ Library experts (PJ Library—all readers of this blog should know of them—check out their website if you don’t as it is a wonderful organization).  And luckily my friend and collaborator, the amazing artist Karla Gudeon speaks Hebrew  and promises to help we with pronunciatio

n before our book tour, so I don’t embarrass myself too badly.

TWM: What advice do you have for aspiring picture book authors?
RM: I gave my advice when you were kind enough to have me on your blog last fall, and I have learned nothing since then—so may I repeat: Read, read, read—and see what the best of your elders and contemporaries are doing. And more importantly, sit down and write. I mean right now. Still here? We all have a million reasons why we don’t have time “right now.” Since this is the last question and you are done with the interview, instead of scrolling back to Facebook, and checking your email: WRITE!!!

Richard Michelson’s many books for children, teens and adults have been listed among the Ten Best of the Year by The New York Times, Publishers Weekly, and The New Yorker; and among the best Dozen of the Decade by Amazon.com. He has been a finalist for the Massachusetts Book Award (3X), the National Jewish Book Award (3X), the Harlem Book Fest Wheatley Award, and he is the only author ever awarded both the Sydney Taylor Gold and Silver Medals in a single year from the Association of Jewish Libraries.

2 Responses to Author’s Notebook | Richard Michelson, The Language of Angels